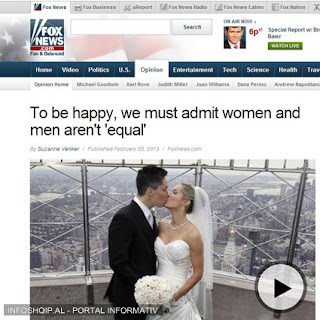 The next article in the typical Fox News, as a channel with strong conviction conservative, was to highlight the merits of heteronormativitetit but with an image that drew the attention of regular readers but also opposing media.

The photo of the article was a couple of the same sex. Women in the photo became famous last year as the first gay couple married in the Empire State Building, but apparently returned to fame again.

"To be equal in wealth, or value, is not the same as being identical, being variable between them," writes Susan Venker, author of the article "How to choose a spouse and to lie down in peace with marriage."

Charging that it itself is talking about the belief that women should stop "fighting" with the men and delivered for their land on Earth is be a wife and mother, nothing more.

This is called as the next gafa Fox News giving more material to become part of the mockery of journalists like John Stuart or Stephen Colburn.