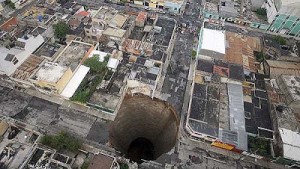 Kulimi of this phenomenon was the sudden opening of a mud hole in Texas SHJBA States 4000 square meters, last August. And this still continues to increase hole, absorbing all that is in the earth's surface and about her.

While scientists have not yet found a possible explanation about this phenomenon, and why they appear!

This phenomenon occurred on August 3 in La Bayou CORNE in Louisiana, Texas and has forced residents of 150 homes in nearby communities to abandon them. Hole is impressive and is located in a wooded area, wetland and cypress trees. Item is already filled with mud, because it has sunk hundreds of cubic meters of marsh. Experts know that underneath is an underground cave with salt while it is rolled out salt domes, while the floor is covered with an unknown substance. Hole formation was accompanied initially by gas bubbles and smelly oil that caused the knowledge in the eyes and nose of the natives. / Alb-observer.com /

For more details ndrini videos below: