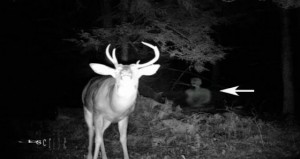 One of the most impressive pictures of mysterious beings realized a few days ago ...!

A mysterious creature, quotes alb-observer.com, appeared mysteriously as a photographer was filming a deer in the pasture, and this being like and look at the pictures appeared at her side.

Photography was carried out in the national park in Allegany in northwestern n Kinzua.
According to the picture, it seems being sits but expects to "communicate" with the deer! / Alb-observer.com /

But what can this be human?